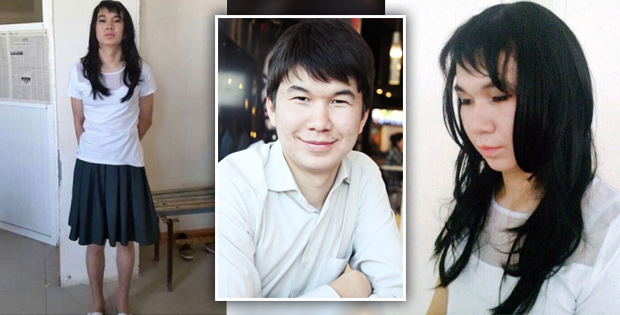 In Kazakhstan a student disguised as his girlfriend to give exam for her. The incident happened in a town of Zhetisai in south  Kazakhstan.

The 20-year-old young man, Ayan Zhademov, appeared in a black wig, white blouse and a skirt at the final examination, that his 17-year-old girlfriend had to give. The girl was worried to attend it, so her beloved in-love boyfriend decided to disguise in her dress.

When the student disguised as his girlfriend sneaked into the examination room, nor professors neither students noticed anything wrong. However, Ayan’s identity was disclosed when his turn came to answer. The members of examination committee immediately recognized the deep male voice.

Members of the examination committee added that the in-love “hero” tried to imitate the high voice of his girlfriend. But all his efforts were in vain. When the cheating was disclosed, some students said that the deed of Ayan was crazy, others admitted that it was very romantic. Later the boy was fined $2200. One of the local businessmen supported the efforts of the boy to help his girlfriend and promised to pay out a half of Ayan’s fine.