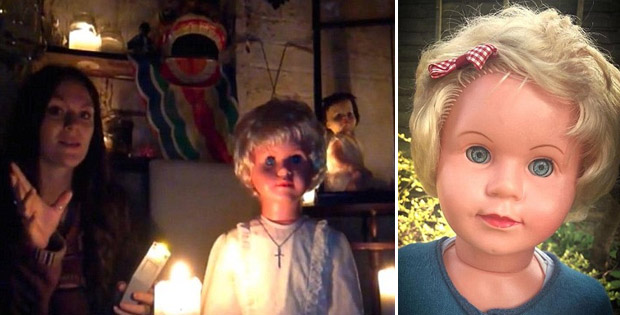 Peggy the doll is believed to be possessed by an evil spirit. It has power to case chest pains, nausea and headaches in those who looks at her, talk about her, think about her. The effect of the doll’s negative energy influence is not only here and now, but also takes place afterwords.

The spirit that lives in the doll is supposedly called Peggy. It was discovered by paranormal investigator Jayne Harris who is the founder of the group ‘Haunted Dolls’. Peggy the doll was sent to her by its precious owner who got rid of the mysterious toy. The woman contacted Harris electronically. She told that while the doll was kept in her house, she was suffering from nightmares every night no matter where the doll was put in the flat.

She’d wake feeling hot and shaken. No matter where she moved the doll to in her home, the nightmares persisted. She apparently sought the help of a local priest but two visits later and there was no change. In September she became quite ill with a fever and began suffering hallucinations. When she recovered, she saw no other option but to get rid of the doll as she was convinced it was at the centre of all that had been happening, Jayne Harris says.

Jayne made a short video of a doll and published it on Internet. In a while she was piled with an array of messages from people complaining about the decline in their health while and after watching Peggy the doll. The paranormal investigator says that at least 80 people had fallen ill and informed her about their health state.

Most of the people suffering from Peggy admit that they start feeling cold, their body starts shaking and they feel her presence in the same room. One woman said her computer froze when she tried to open Peggy’s photo. Another alleged victim suffered a heart attack at the time she looked at the doll. In order to learn the secret of Peggy, Jayne Harris conducts different spiritual paranormal sessions using various gadgets and asking questions to the spirit.

In order to do the work I do well, I have to approach each case as a sceptic initially and look for ‘normal’ explanations for things. If it were one or two occasions that things were happening on, I could do that, but with Peggy I just know there’s something more.

Psychics and medium who have already come in contact with  Peggy say that she has an aversion towards the crucifix  that proves she is not Christian. Experts tend to the opinion that the spirit may be connected with the Holocaust. They suppose that the spirit can be a wayward soul of a Jewish woman who died from a disease causing breathing problems like asthma attack.